Welcome to the first instalment in a series I’m calling “How I Got the Shot.” The idea of this series will be to post, at regular intervals, a full story on how I got some of my favourite shots. This first post is about one of my all-time favourite shots showing full commitment from Pete Oswald at Treble Cone NZ. What you don’t see in the shot is the photographer’s ‘pucker factor’ here! Let me explain…

Pete Oswald is a professional skier from Queenstown, NZ.. the guy’s been skiing pretty much since he could walk and he’s been all over the globe. He’s even recently won Queenstown’s ‘Through the Lens’ competition with a short film titled “From Tree Wells to Sea Swells” (link below). He’s awesome to ski with and even more fun to shoot, giving 100% commitment and asking no questions except the occasional “Can I go bigger?” When we went out to shoot on this particular day, Pete had dislocated his elbow less than a week before and was in a fair bit of pain, but despite that he got stuck into it and we got some great shots.

I’d been in the Queenstown/Wanaka area for a few weeks covering a heap of events including the FIS Halfpipe World Cups and the TNF NZ FreeSki Open. While I was there, I had arranged to shoot a couple of ski resorts for SnowAction magazine, and Pete and I had teed up a day at Treble Cone.

The day started early in Queenstown where I picked up the crew and pretty soon we were signing on for our day passes and itching to get on the snow. There hadn’t been any fresh snow for a few days, but the sun was out so we were hoping to find a few pockets here and there to take advantage of the light. We met up with Treble Cone senior instructor and our second skier for the shoot, Tom Williams, and with his and Pete’s local knowledge we ended up finding some great little patches of snow that had been left untouched and out of the sun. We played around on those for a while in the morning getting some good shots but nothing spectacular, so we decided to hike up to the top for a look. 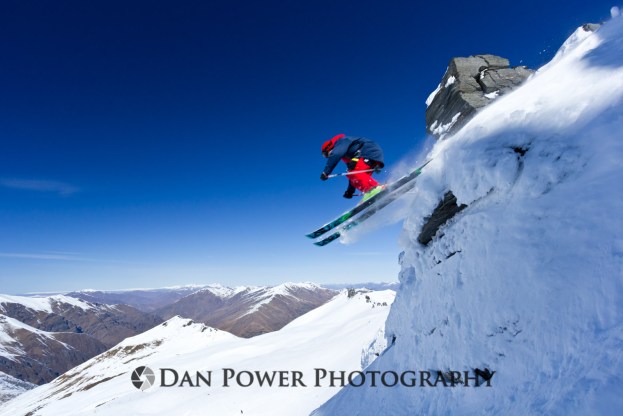 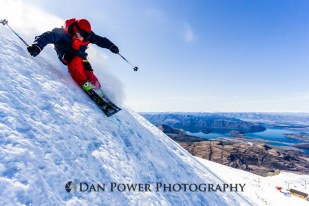 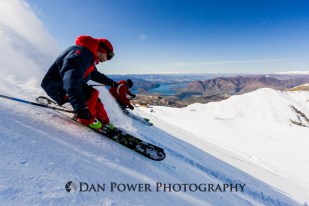 Once we got up to the top saddle we had a perfect view out over the TC backcountry… and it is IMMENSE. I’d never been to TC before, and I was stoked with the amount of terrain out there. We could even see a chopper or two doing laps! If only we’d had more than one day! But sadly that was all the time we had, so after a few minutes’ of staring longingly out over the endless snow-capped mountains we continued the hike to the top. 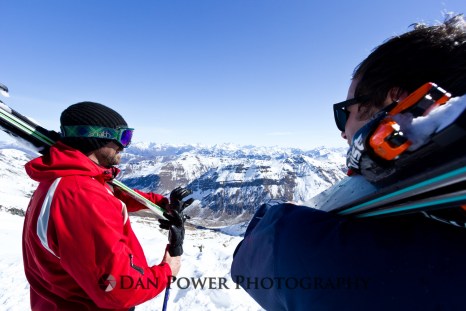 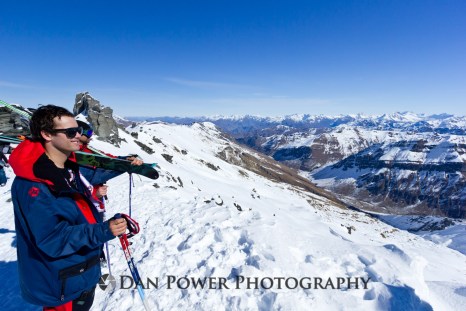 When we got to the top of the hill we found something I hadn’t expected… an igloo built on a rocky outcrop! The boys told me it usually gets built every year, often by different people than the year before but it’s always there. A bit of searching later and I found a few YouTube videos from people who’d actually camped up there for the night! It sounded like a killer experience but again, something I just didn’t have the time for.

I took a few shots of Pete hitting some drops near the igloo but again, we just couldn’t seem to get the absolute banger. We took a time out and that’s when Pete saw it; a massive chute over the back that looked like it could be reached with a 10 or 15 minute hike. Some local groms were playing around in the igloo and they seemed to have had the same idea as us, so Pete hiked over the ridge with them to find the top of the chute. I had a pretty good view of the chute from where I was, so I stayed put and looked for the best angle I could find….. unfortunately that turned out to be from the left hand side of the igloo and, as you can see in the photo above, there was not a lot of legroom!! I shimmied around to find my spot and, of course, it happened to be on the most narrow section right next to the igloo. With my back pressed firmly against the igloo wall I waited for Pete to make the hike to the top of the chute, briefly summoning up the courage to take this “don’t look down” shot…

After what seemed like an eternity, Pete shouted out from the top of the chute and we were ready to go. I had everything dialled in before he got there, and had double and triple checked since we really only had one hit at this. I gave him the all clear, and he dropped the chute first like a boss. 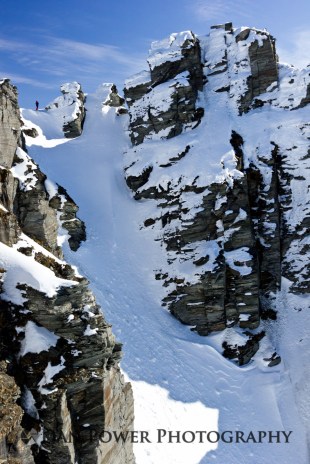 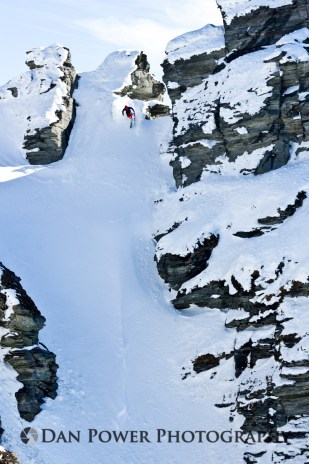 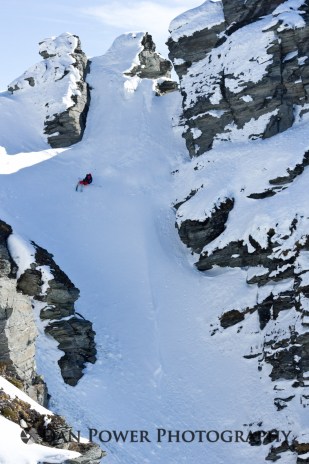 After the chute, Pete spotted a ridge that looked prime for a powder slash, so once I had my composition right there he swooped in and gave it all he had. The resulting sequence was awesome, this one shot in particular just jumped out at me as soon as I saw it on the back of the camera and it required almost no post processing. I was absolutely stoked with the end result and needless to say, it ran in SnowAction’s Southern Pride issue along with a couple of other shots from the day.

Don’t forget to check out Pete Oswald’s Facebook Page and his award winning video, From Tree Wells to Sea Swells.

To get your hands on a copy of SnowAction magazine, visit their Subscriptions page.

Dan is a professional photographer specialising in product photography and winter sports coverage. During the northern hemisphere winter Dan spends a large amount of time in Niseko, Japan, shooting skiers and snowboarders for editorial and commercial clients. For the remaining months Dan is based in Newcastle (Australia) and produces stunning product, corporate and lifestyle images for a range of clients all over the world.